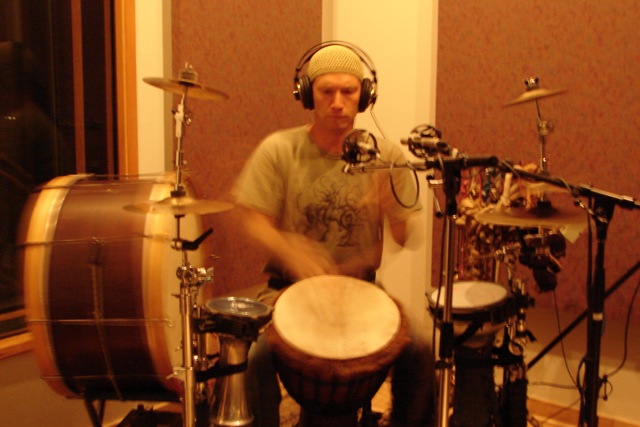 About 12 years ago I was at the Oregon Country Fair where I play violin with a crazy modern vaudeville troop every July. From a distance, (the fair is set on 200 acres of forests, paths and meadows), I heard the sound of a drum.

I followed the sound about 20 minutes to its source and found Jarrod Kaplan playing his Djembe with a unique and melodic style. I introduced myself and we fast became friends. Jarrod soon after found a wonderful Senegalese Djembe for me, ever since a fixture at Big Red. And Jarrod became a regular session player, providing great sounds and playing on many of my productions. For each session, Jarrod would bring a van full of percussion instruments and would set up a “kit” consisting of a Djembe, 2 dumbeks, shakers and bells on his ankles, splash cymbals, bell trees and a large orchestral bass drum.

Jarrod began his creative life early, as a childhood actor in New York. He was in the cast of “The Guiding Light” soap opera and appeared in numerous commercials. He left acting and went to music school. Since moving to the west coast, Jarrod founded and toured extensively with Trillian Green, Hanuman and Taarka, three distinct and well-known high energy jam bands. It was great co-producing 3 CDs for the latter two.

Anyway, Jarrod auditioned for and received a call to be a member of the band for a new production of Cirque de Soleil. He left Oregon this New Years Day for two months of rehearsals in Montreal to be followed by two years of world tours.
I am happy for Jarrod’s deserved success and look forward to seeing him when Cirque de Soleil comes through Oregon.